Bush's View of the Victims of Hurricane Katrina 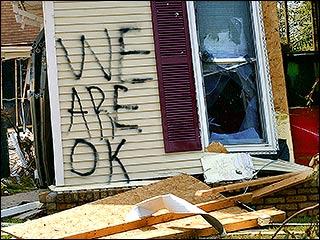 Bush's pathetic reaction to the suffering of tens of thousands of Americans (refusing to end his vacation early; flying over destroyed area and not landing) is quite telling. To me, it is a perfect example of how he has spent the last five years: insulated, aloof, on vacation, etc. I have heard a number of pre-emptive right-wing media attacks. They are already working on the talking points -- blame everybody BUT Bush.

To all you Republicans...yes, Bush did not cause the hurricane. I will grant you that. But the horrible post-disaster relief effort can be blamed on Bush. We simply don't have enough National Guard members to mobilize and help because they are all in Iraq. We don't have enough emergency relief money because it has all been diverted to Iraq. The worst thing I have heard about this whole situation is that the problem in New Orleans (the levees breaking, the city flooding) has been known for a long time. FEMA and the Army Corp of Engineers (under orders of the Clinton Administration) had been working on a shoring up the levees to ensure that a disaster like the one this week would not happen. That funding was slashed down to almost nothing by the Bush Administration and the GOP Congress. The money was used in...you guessed it -- Iraq. Read that here. I think it is fair to blame Bush for that.

While most of the GOP (and their surrogates in the media) are working on spin, they should be working on helping the thousands of devastated people. They should be, first-and-foremost ending their vacations! Second, pass some emergency spending measures. Third, pass emergency legislation that would prevent insurance companies from refusing to pay for claims related to flooding. The insurance companies are already saying that the damage in New Orleans is caused by a flood NOT by a hurricane -- giving them an excuse not to pay.

At least one GOP newspaper, The New Hampshire Union Leader, has called Bush out on his shoddy performance the last few days. It's a little tame for my taste, but at least they are not trying to blame Democrats!

Oh, and one more thing...your gas prices being over $3 a gallon is not the fault of the hurricane disrupting refining. It is because we have no real alternative energy policy. When we start a war to gain access to oil fields and it backfires, prominent Republicans advocate killing leaders of oil-rich countries, AND we have no other way to fuel our cars...the prices will go up. Again...remember the Bush "energy program" passed with only GOP votes. They are the responsible ones. Remember this in November 2006 -- don't let them win again with their "Fear, Smear, and Queer" strategy. Would you rather have a better economy and way of life or prohibit gays from marrying? I know which I would choose.