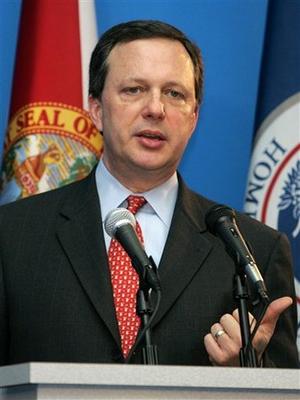 This idiot is still being paid by US taxpayers as a "consultant." (Apparently he cannot get another job anywhere in the US)

How much crack has this guy ("Brownie") been smoking since he became the first-ever member of the Bush Administration to lose his job (for a reason other than telling the truth)? He is still clinging to the GOP talking points from two weeks ago -- blame the locals. How sad. Does anyone from the Bush Administration accept responsibility for their failures?

And another point...Why are so many on the right blaming the media for failures in disaster response? I have seen a number of right-wing blogs that are just viciously attacking the media. Why? I think it's because the media finally did its job and exposed the rampant incompetence inside the Bush Administration. What else could it be? The right wingers worship George Bush like he was a deity, so I guess it looked like someone was attacking their religion.

The real religion of the Bush Administration (as we all know) is supply-side economics and profiteering. Joe Allbaugh -- Brownie's predecessor at F.E.M.A. -- is now getting rich by lobbying on behalf of companies to get business related to Katrina and Rita. The problem you ask? All of the contracts are "no-bid" contracts, so you and I -- the taxpayers -- don't get the best price for services. We get the rate that disaster profiteers like Haliburton feel like charging. Get ready for $400 hammers, $1000 ladders, and $100 turkey sandwiches. F.O.W.'s (Friends of W's) get rich, while local, regional and minority-owned business get nothing. No one on the right is even the slightest bit suspect of this -- just like they refuse to demand oversight on Iraq contracts. Nine billion dollars missing in Iraq? No biggie. But, god forbid, a black evacuee uses their Red Cross debit card in a questionable way, and the right is ballistic. Their priorities are completely fucked. How typical of the modern day Republican party. What is it exacly about capitalism and the free market that Republicans hate? They refuse to allow bidding on contracts in Iraq and the Gulf, and they prohibited price negotiation in their ridiculous Medicare bill. The GOP is looking a whole lot like the former Soviet Union everyday. Read more about this sick, out-of-control croneyism here.

That is not the only corruption in the GOP. Republican super-lobbyist, fundraiser and friend of Bush and Tom Delay is being ivestigated by the Justice Department for numerous illegal activities. The career prosecutor handling the case was just demoted by AG Gonzalez. Was he getting too close to the White House in his investigation? I tell you there is not a respectable person in the upper ranks of the Republican party. They are all either corrupt, morally bankrupt liars and war/disaster profiteers or ignorant, head-in-the-sand apologists for the rampant graft that defines the Bush presidency. I report -- you decide. 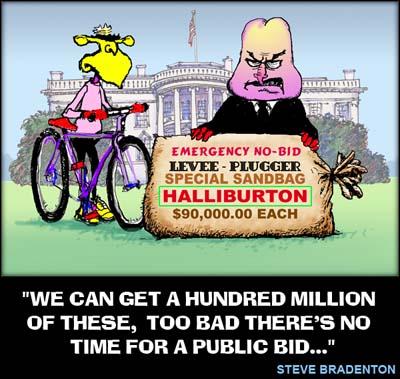