All Quiet on the Western Front...A Little Too Quiet 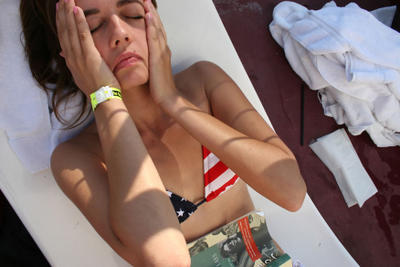 I'm reporting to you today from the solitude of my mother's office. You see, since I am unemployed, my Mom thought it would be good for me to get out of the house and do some work. OK. She is out of town for a work-related convention in San Francisco, her office manager is on vacation, and the rest of the staff is remarkably nowhere to be found. Works for me. All I'm doing is answering phones and taking messages. I went to college, so it is not exactly taxing work mentally. Except for the fact that it is very boring with no one around, I'm having a good day. I brought in my new computer and immediately found someone's unprotected wireless internet signal and got online. My Mom's office is, of course, wired for the internet, but I don't want to put personal stuff on someone's work computer. And since some of her employees access their work computer from home, I didn't think I should disconnect one of them from the internet and hook up my computer. So, I have an empty office with Air America playing and I can blog in peace. The office is pretty dead, except for one lone hottie in an office across the hall. She looks pretty young, and I'd imagine she is the daughter of someone that works here. Don't get the wrong idea, she's at least college age....

Yesterday, I went and saw a shrink. Don't get all freaked out, my Dad is one. Getting analyzed is not exactly foreign territory for me. I went because I am just completely listless and unexcited about anything. I'm 34, and I have no idea what to do with the rest of my life. I have already owned my own business, worked in fields as diverse as entertainment and real estate, and have lived in most regions of the country. It is hard to get motivated to go out and find my "dream job" when I don't have one. Though I hate sitting around doing nothing, right now there is no place I'd rather go every morning than to my living room. I'm like that guy in Office Space. I just want to do nothing.

Since I'm a college graduate, a pretty smart guy, somewhat creative, I should have no problem finding a good job, right? Wrong. It turns out that my experience is looked at as a negative in the corporate world, and I will never get a job with the Fortune 500 set. Fuck them. I never wanted to work in that world anyway. But what the hell am I going to do then? Omaha is not overflowing with start-ups, or entertainment agencies, or anyplace where I might be a good fit. I guess I have just gotten so frustrated and discouraged that I don't really want to keep looking. This, of course, is not realistic. I have a pretty decent sized savings, but I can't live off of that forever. It was suggested to me that I may be depressed and that depression is clouding my outlook on things, and making me see my situation only in negative terms. I don't know. Maybe. Since I can't really refute the "diagnosis," I figured I'd lay down on the couch and get shrunk for a little while.

What did I learn? Well, it was only one session, so I didn't learn too much. I was honest with the guy, and I told him plenty of details about the last few years of my life. He doesn't think I have any type of serious depression or anything. Maybe a mild case. I basically need to change the way I view my situation and myself, because I am trapped in this negative cycle (or some other psychobabble-like term). Oh, and I shouldn't smoke pot anymore because it is contributing to my generally blase outlook. He's probably right about that, but I am a cynical person by nature. I don't think quitting pot smoking will all of a sudden turn me into some raging optimist. Bottom line is, if you cheap fuckers would just give me a bunch of money then I could turn this blog into a full-time job. I'm sure that would put a smile on my face.

The Wide World of Politics
THE REST OF THE DARK STUFF 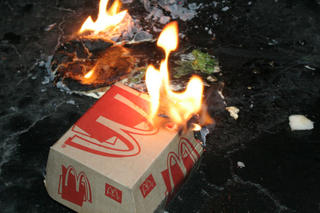 Don't torch that McDonald's just yet! A new study by the American Heart Association has just been published links belly fat to tobacco smoke in teenagers. The stats are little underwhelming, so I don't think I'd go changing your behavior just yet...Queens of the Stone Age will be performing on Jimmy Kimmel Live this Friday, August 5th according to Audio Aggression. The show's website says the guest will be 311 that night. I'll guess you'll have to tune in to find out...Green Day have pulled their first two albums out of the Lookout! Records catalog claiming they have not been paid proper royalties for sales of the CDs. Lookout! had the rights to the first two GD albums, 1,039/ Smoothed Out Happy Hours and Kerplunk, since they were first released back in the early 90s. The label has taken the news pretty hard, as they had to lay off six of its nine employees due to the loss of revenue. This will no doubt cause some type of backlash against Green Day for "hurting" an independent label. However, if the label was not paying royalties, the backlash should be directed at Lookout!...A new report finds that a new blog is created every second of the day. The number of blogs doubles every five months! There are now over 14 million online today. No wonder it's so fucking hard to find an audience!...This is great! An Israeli playwrite has written a response to 'The Vagina Monologues' called 'The Holy Phallus.' It is written in Hebrew, and has been getting "mixed" reviews. Personally, I don't want to see a play about a guy's penis no matter how well written it is... 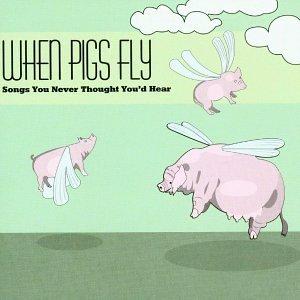 SONG OF THE DAY: "Ohio" by Devo
Yes, it's that "Ohio!" The one by Crosby, Stills, Nash & (most importantly) Young. Devo does a very "Devo-esque" (I don't know how else to describe it) version of the 60s anti-war anthem. The songs comes from a bizarre compilation on Xemu Records that has artists doing very strange covers (i.e. Don Ho doing "Shock the Monkey" by Peter Gabriel!). The disc is called When Pigs Fly: Songs You Thought You'd Never Hear, and you can pick it up here. 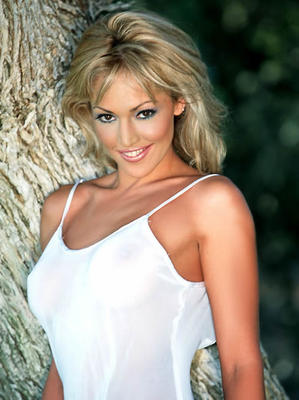