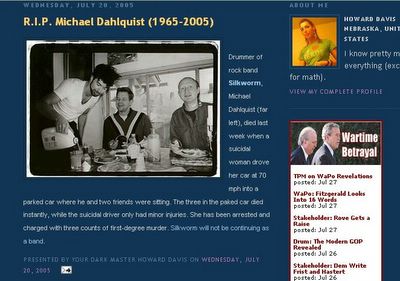 This story just keeps getting worse. Last week I posted about how the drummer of Silkworm was killed in a car crash by a suicidal driver. I just today found out that I knew one of the other people in the car. John Glick, one of the other persons in Dahlquist's parked car, is a guy I knew when I lived in Wisconsin in the 90s. He was in a band called Fez Petting Zoo who used to play shows with bands on my label all the time. He also worked at my favorite record store in town, Mad City Music. Here is the article from the Chicago Tribune:
--------------------
Driver charged with triple murder in crash
--------------------

Woman allegedly had a death wish

Three Chicago musicians who worked regular jobs by day and rocked at night were killed when a young woman bent on ending her life barreled into their car on a Skokie street, law enforcement officials said Friday.

Jeanette Sliwinski, 23, has been charged with three counts of first-degree murder after telling police investigating Thursday's crash at Niles Center Road that she had been in a fight with her mother and "wanted to end it all," authorities said.

Sliwinski, of the 8900 block of Parkside Street, Morton Grove, was going at least 70 m.p.h. eastbound on Dempster Street and had run three red lights when she rammed her 2000 Ford Mustang into the car carrying the three co-workers who were out for lunch, authorities said.

Killed were Michael Dahlquist, 39, of the 4800 block of South Ashland Avenue; John Glick, 35, of the 2800 block of West Palmer Street; and Douglas Meis, 29, of the 4500 block of North Lincoln Avenue, all in Chicago. Condolences buzzed across music-related Web sites as friends and fans shared the news. The men were in the prime of their lives, and more concerned about touching people with their art than making hit records, friends and relatives said.

"They were people who were so smart and brilliant and amazing," said Rebecca Crawford, Glick's wife. "Everyone feels cheated that they haven't been able to accomplish what they set out to do."

Dahlquist, who moved to Chicago from Washington state five years ago, played drums for Silkworm, a band praised by critics for its independence and eagerness to experiment.

Glick grew up in Boston and moved to Chicago six years ago. He was a guitarist and singer with the Returnables. Meis played drums with Glick's wife in a band called The Dials, described by Matt Priest, a talent buyer, as "loud and noisy but super melodic and super poppy."

"Michael was friendly to an extreme. He was a very outgoing and upbeat guy," said Tim Midgett, who played bass and guitar with him.

Without Dahlquist, the band is over, he said. "He can't be replaced."

By day, the three worked together at Shure Inc. in Niles, which manufactures microphones and other audio electronic products, said Paul Applebaum, company vice president.

The deaths "really devastated a lot of people here," Applebaum said. "We are trying to make some sense of it ourselves. These people were highly respected and well-liked around here."

Sliwinski, who is in fair condition at St. Francis Hospital in Evanston, declined to be interviewed, hospital spokeswoman Christine Rybicki said. Sliwinski also has been charged with two counts of aggravated battery, authorities said.

People who answered the door at her Morton Grove home declined to comment.

Skokie police said Sliwinski was not tested for alcohol or drugs.

Police did not say if she was wearing a seat belt at the time of the crash.

The three men were stopped at a red light at about 12:20 p.m. when their Honda Civic was rammed from behind, said Colleen Daly, Cook County assistant state's attorney.

Daly said Sliwinski made no attempt to stop. Her car pushed the Honda into the car in front of it, injuring two others, and a fourth vehicle received minor damage, the prosecutor said.

The Honda and Ford went airborne and flipped over, with one of the victims being ejected. The brakes in Sliwinski's car were functioning properly, Daly said.

"She said she wanted to end it all when she ran into the back of the car," Daly said.

Cook County Circuit Court Judge Consuela Bedoya ordered that Sliwinski be held without bond Friday. She is under guard at the hospital.

Cook County court records show Sliwinski pleaded guilty April 5, 1999, to retail theft and was sentenced to community service. On Jan. 21, 2000, she pleaded guilty to consuming alcohol as a minor and paid a $100 fine, records show.

"Some people who knew them had to leave work," said Applebaum, adding that customers also were upset and offering sympathy.

"The remarkable thing is how many people said they knew these people personally," he said.

Glick was a senior marketing specialist and had been with Shure since June 2001. Dahlquist was a senior technical writer who started with the company in October 2001. Meis started in December 1998 and was a customer service specialist.

Crawford said she was still in shock over the deaths.

"The three of them created an enormous amount of laughter and happiness in others' lives," she said. "They had a certain exuberance about life that is really hard to come by."
Posted by Dave Splash