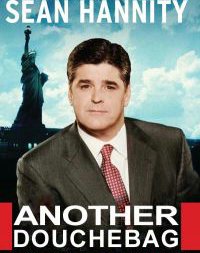 There is so much to be angry about in today's Republican-dominated political environment that it's hard to keep track. Most Republicans are simple Bush toadies. They just follow the party line, and vote in lockstep. They disregard their constituents' wishes (usually) and do whatever the party leaders order them to do. A few Republicans go beyond the call of duty and make exceptions of themselves -- not in a good way. Sean Hannity is the GOP King of the Douchebags -- nobody comes close. But there are plenty of other noteworthy losers. Today's is Indiana Republican Congressman John Hostettler. 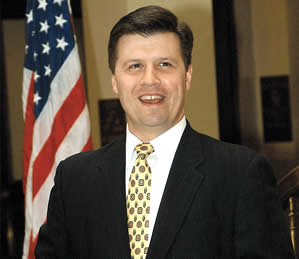 Here is the what this douchebag said yesterday on the floor of the House of Representatives while debating a defense bill:

"Like a moth to a flame, Democrats can't help themselves when it comes to denigrating and demonizing Christians"

This ridiculous slander came up when the House was debating an amendment that would prohibit proselytizing at the US Air Force Academy. No Republican objected to the remarks at all, and Hostettler was forced to remove his comments from the record after strenous objections from the Democrats (including Christians like Daid Obey of Wisconsin). The GOP completely supported this religious fascism.

This is hardly the first idiotic move this Republican has made. When the Supreme Court ruled that courtrooms in Indiana could not display the Ten Commandments, Mr. Hostettler introduced a bill that would not allow court orders that he disagreed with to be enforced. He was trying to remove the funding, which would make enforcement impossible. He later introduced a bill that stated that the courts were unable to address the constitutionality of a law passed by Congress. THIS IS THE VERY NATURE OF CHECKS AND BALANCES YOU IDIOT! Marbury v. Madison, a Supreme Court case from 1803 settled this issue. This is such a fundmental and basic concept that I find it shocking that any member of Congress would question the ability of the courts to determine the constitutionality of laws passed by Congress. This is civics 101. It's called judicial review. Without it, our Bill of Rights are meaningless.

Lastly (although I could come up with lots more), Rep. Hosttetler was arrested last year for attempting to bring a loaded glock handgun onto an airplane. He claimed he didn't know it was in his briefcase. Sure....

Next GOP douchebag: Ken Tomlinson - Chariman of the Corporation for Public Boradcasting
Posted by Dave Splash